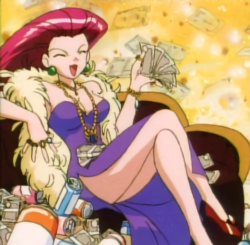 Old money doesn't wave dollars around. And they recycle their soda cans.
Jimmy: Are you English?
Tad: Well, no. I just speak this way because I'm very insecure. You see my father is a self-made man so I pretend to be old money, but in fact I'm really nouveau riche.
— Bully
Advertisement:

Literally "new rich" (pronounced noo-voh reesh), less literally "new money," this is the negative take on the Self-Made Man — or any character who unexpectedly came into money. The Nouveau Riche are characterized as rude and tasteless and frequently contrasted with the refined manners of aristocratic Old Money characters.

How they made the money depends where they come from and when the particular work is set. If British, expect them to be from either Oop North (with wealth made from industry) or more recently, London/Essex (with new wealth from the financial sector). If American, expect them to be Hollywood California people with bleach-blonde Valley Girl daughters, slovenly white trash who won either the lottery or a big-time settlement, obese Deep South oil barons, cattle tycoons, contractors (especially in small-town settings), (if set in pre-Civil War times) a cotton-pickin', slave-whippin' Fat, Sweaty Southerner in a White Suit, or Silicon Valley nerds from the dot-com or the mobile services boom era compensating poor social skills with tons of money. If black, expect a flashy character from a Glam Rap video or an athlete (usually football, basketball, or boxing). Especially unsympathetic depictions may give them ties to organized crime - or otherwise all-round jerkassery and contempt towards the social class they used to belong to. Common accessories for this class include fur coats, gaudy jewelry, obnoxiously color-coordinated suits, and gold teeth, as well as a love of equally flashy and gaudy vehicles (usually either European performance cars or blinged-out SUVs). They also tend to love throwing debauched, drug-fueled parties, and spending ludicrous amounts of money at similarly overpriced nightclubs or strip clubs is their idea of a night out on the town.

Often paired with Conspicuous Consumption and Acquired Situational Narcissism, and can lead to A Fool and His New Money Are Soon Parted. Old Money, in contrast, are usually much more restrained in both taste and spending, as they have no need to flaunt the wealth they've always had and no wish to throw away the family fortune on trivial pursuits.

A common method of playing with the trope — and one more common in modern works where traditional aristocracy and 'Old Money' aren't quite as revered as they used to be — is to have the Nouveau Riche character despite their lack of 'class and breeding' be a lot more likable and down-to-earth than the Blue Blood types, usually because they know exactly how lucky they are now and how unfortunate they were before. Bourgeois Bohemians, with their pairing of progressive views and wealth, may be played this way if not as rivals. In this depiction, expect the 'class and breeding' the Blue Bloods and Old Money types obsess over to be codewords for snobbery, arrogant entitlement and stuffy, fusty over-adherence to pointless tradition. In Slobs Versus Snobs works where it's one against the other, expect them to see the old money types as pompous, arrogant elitists who have no clue what it's like to ever have to work for and/or want for anything, and for the Old Money to see them as crude, boorish, loudmouthed assholes who have far more money than they do dignity, taste, or basic integrity or moral character.

Compare Idle Rich and Yuppie who was an '80s version of this trope albeit with less crassness and tastes in Conspicuous Consumption that tended to be more subtle. Contrast Old Money, Upper-Class Twit (negative portrayals of Old Money people), Impoverished Patrician (although are likely to end up at the sides of a Nobility Marries Money situation), Simple, yet Opulent (what these people are not prone to buy), Lower-Class Lout (what quite a few examples tend to have been prior to obtaining their money, though the "lout" part stays; this is what the phrase "cashed-up trash" usually refers to). A Trumplica will often have traits of this.