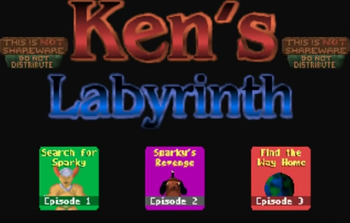 25 years later, the same company made Fortnite.
Ken's Labyrinth is a First-Person Shooter for DOS, released in 1993 by Epic Games (then called Epic MegaGames). It was mostly coded by Ken Silverman, who went on to design the Build engine that was used for rendering a first-person viewpoint in Apogee Software's Duke Nukem 3D. It consists of three episodes, the first of which was released as shareware.
Advertisement:

Here's what's going on, plot-wise. The Zogar Imperial Empire led by the infinitely evil (and ugly) Ken takes people from various worlds and puts them in their danger-filled labyrinth just for their own entertainment. If that person doesn't make it out of the labyrinth alive, their home planet becomes coal for the Zogarians' jelly-making stoves. By the way, nobody has pulled it off.

The Zogarians have kidnapped your dog Sparky. They interrogated him, and found out that dogs are some of the smartest creatures in the universe. So now, the Zogarians are too afraid he'll solve the labyrinth, and they're making you do the labyrinth instead. You also need to rescue Sparky, while you're at it. Remember, if you don't pull it off, Earth becomes jelly stove fuel. No pressure.

The game has been released as Freeware by Silverman himself.