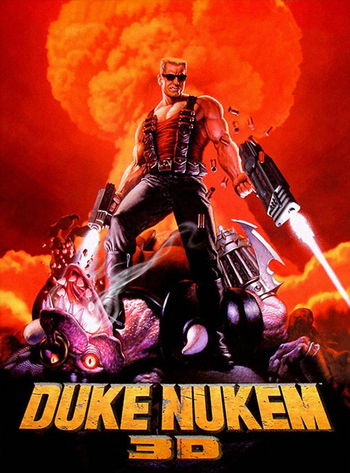 "Prepare yourself for total meltdown!"
"Damn! Those alien bastards are gonna pay for shooting up my ride!"
"Nobody steals our chicks... and lives!"
"It's time to kick ass and Chew Bubblegum, and I'm all outta gum."
"Somebody's gonna friggin' pay for screwing up MY vacation!"
"I'm getting too old for this shit!"
— Duke, at the beginning of each episode.
Advertisement:

3D is set after the events of Duke Nukem II, as Duke returns to Earth to celebrate his victory over the Rigelatins. However, his space shuttle is shot down by an unknown force, and he is forced to crash land onto the roof of a tower in downtown Los Angeles. He quickly finds out that an army of aliens is in the process of invading the city, and have turned all members of the LAPD into grotesque pigmen-monsters, while abducting women left and right. Duke decides to take matters into his own hands, and starts to repel the alien invasion, street by street.

The game is packed with non-linearity; the player could take shortcuts to the end of the level and find secrets, and there were plenty of usable (and destructible) things, such as hydrants, fountains, toilets (all of which regenerate health) and light switches. While this is nothing new in our era, at the time of its release, a fair amount of these elements were a novelty. As an early FPS, it has plenty of weapons (such as kicks, pistols, shotguns, chainguns, rocket launchers, pipebombs, wallmines, and even shrink rays and a freeze gun) and items (Medkits, night vision goggles, steroids, a hologram device, a scuba gear and protective boots among others). Oh, and it also has a Multiplayer mode. It was also among the first FPS games to use the z-axis and is still one of, if not the, best at integrating it into the majority of gameplay, rather than the occasional sniper and hidden target.

In March 2013, an officially sanctioned 3D-accelerated Open GL port of the game and all its expansion packs, with PC support for downloading mods through the Steam Workshop, was released on Steam, PlayStation 3 and Playstation Vita as the "Megaton Edition". The port was done by the indie group Devolver Digital, who are probably best known for publishing the indie hit Hotline Miami (and, ironically, Serious Sam, which was known for its Take Thats at Forever's perennially-delayed release). However, Devolver eventually lost the license for this edition and it was pulled from Steam and from Sony's storefronts in early 2016.

In September 2016, Gearbox announced Duke Nukem 3D: 20th Anniversary World Tour for PC, PlayStation 4, and Xbox One: a new re-release featuring all the content of the Atomic Edition (the third-party expansions not included) plus a brand-new fifth episode created by two of the original game's level designers, with a new musical score by the original composer, a new weapon and enemy, new and re-recorded Duke Talk by Jon St. John, and enhanced graphics, released that October. A Nintendo Switch port was released later in June, four years later.

Damn. Those alien bastards are gonna pay for shooting up my tropes!

"My name is Duke Nukem, and after a few days of R&R, I'll be ready for more action."