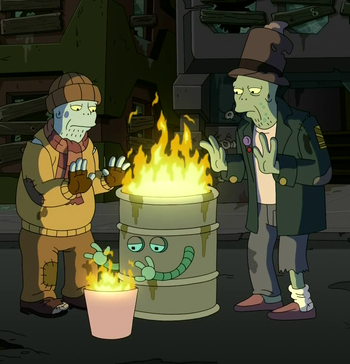 But how will the pink trashcan stay warm?
"Bonfires burning bright,
Pumpkin faces in the night."
— The Misfits, "Halloween"
Advertisement:

Trashcan Bonfire: a bonfire in a trashcan or oil drum. Often homeless people will be huddled around it for warmth.

Will sometimes be added to a Smoke and Fire Factory. A character might burn something within it or someone might knock into it and become a Man on Fire. Or it might just stay in the background.