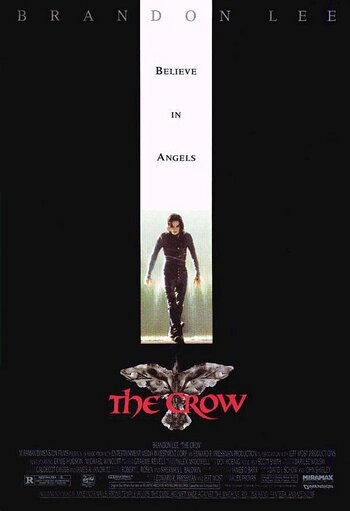 "People once believed that when someone dies, a crow carries their soul to the land of the dead. But sometimes, something so bad happens that a terrible sadness is carried with it, and the soul can't rest. Then sometimes, just sometimes, the crow can bring that soul back to put the wrong things right."
— Opening Narration of Sarah
Advertisement:

The Crow is a 1994 American superhero action thriller film based on James O'Barr's comic book of the same name. It was directed by Alex Proyas and co-written by David J. Schow and John Shirley, and starred Brandon Lee in what would be his final role.

One fateful Devil's Night (October 30), the lives of two lovers — rock musician Eric Draven (Lee) and his fiancée Shelly Webster, who planned to marry on Halloween — are destroyed when they are killed by a group of gangbangers who break into their home (and have their way with Shelly).

A year later, a crow taps on Eric's gravestone, and he rises from his grave. Discovering that he is invulnerable and super-powered, he sets out to hunt down and slaughter the street gang responsible for the murders with the aid of the crow, which serves as his Magical Guide. Along the way, he befriends a local beat cop, Albrecht (Ernie Hudson), and reconnects with a troubled local teen, Sarah (Rochelle Davis), forcing him to remember that there is more to life than hatred.

While The Crow is notable for its stylish action, dark atmosphere, gothic art direction and energetic industrial soundtrack (featuring Nine Inch Nails, The Cure and The Jesus and Mary Chain among others), it's unfortunately destined to be forever overshadowed by the tragic accidental on-set death of Brandon Lee by a failed special effect. Production was halted as a result, and after serious deliberation over whether to finish the film, it was completed through rewrites and the use of a stunt double and digital effects. This process was assisted in no small part by the film's distributor Miramax, who picked up distribution rights after Paramount opted out due to filming delays and controversy over the content potentially being inappropriate in hindsight, and gave the film's budget an extra $8 million.

The film proved to be a success and has become a strong Cult Classic in the years since its release. Its success led to a franchise with a sequel (The Crow: City of Angels), two spin-off films (The Crow: Salvation and The Crow: Wicked Prayer), and a TV series The Crow: Stairway to Heaven that returns Eric Draven to life (with a new actor) to serve as protagonist.