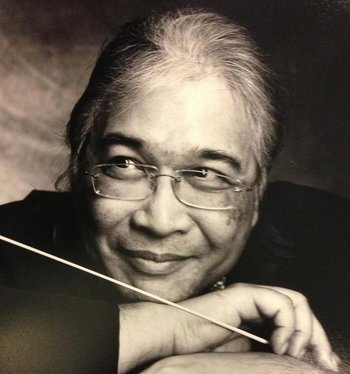 S. P. Somtow, sometimes known as Somtow Sucharitkul, is a Thai/American author of English-language science fiction, fantasy, and horror, as well as a composer and musician.

Somtow is a minor member of the Thai royal family, but he was raised in England, and his first language is English. He moved back to Thailand while still fairly young, and is fluent in both languages. He currently has dual US/Thai citizenship.

His early fiction was published under the name Somtow Sucharitkul, but he quickly switched to using S. P. Somtow—possibly because it's easier for westerners to spell. The P comes from his actual middle name, Papinian. Much of his older work has been republished under the new byline.

As an author, his best known work is probably Jasmine Nights, a semi-autobiographical work set in Thailand with added elements of Magical Realism. He also has several SF series, including the Inquestor series, the Mallworld series, and the alternate history series, The Aquiliad. His horror novels include Vampire Junction and its sequels, the cowboy/werewolf novel Moon Dance, and the YA novel The Vampire's Beautiful Daughter. He wrote and directed the horror film The Laughing Dead, and co-wrote the Roger Corman film, Bram Stoker's Burial of the Rats.

He has also written novels set in the Star Trek universe, the V (1983) universe, and The Crow universe.

As a musician, he has composed a number of operas, several symphonies, and one ballet, Kaki. His opera Madana (based on a play by King Rama VI of then-Siam) was the first western-style opera ever written by a Thai national. He also wrote a musical, Raya the Musical, based on a novel by his mother which had already been adapted as a soap opera on Thai TV. In addition to his work as a composer, he is the artistic director of the Bangkok Opera.