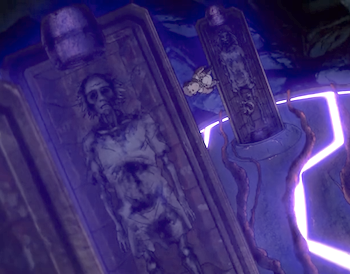 "Harry, your odds of catastrophic failure in this situation is... 120%? That, that can't be right. Oh, wait, I see. It's says 'Complete certainty Harry will die in the stasis unit, plus another one in five chance it'll decapitate him while he tries to climb inside.'"
— SF Debris lampshades this trope, which the Voyager episode surprisingly averts.
Advertisement:

For such an advanced technology, cryonics is subject to a surprisingly high failure rate. Whenever our far-future heroes discover some long-forgotten set of Human Popsicles, at least one of them is inevitably dead or otherwise can't be revived. (Mainly so they can give a good skeleton scare.)

In some cases, this is practically a "cherry popsicle" in that a great number of the unrecoverables are insignificant to the story.

This might be an example of Truth in Television, though, given the real-life uncertainty of the process. For the situation when someone is frozen and then deliberately smashed to pieces, see Literally Shattered Lives. See also Cryo Sickness, for those cryosleepers that wake up damaged or ill, but alive.