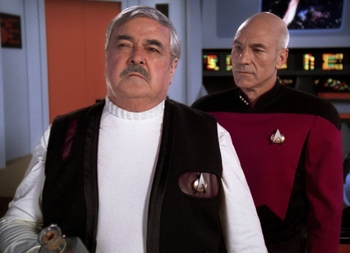 The Enterprise finds the USS Jenolan, a ship that was missing for 75 years, crashed on the surface of a Dyson Sphere. An away team of La Forge, Riker, and Worf beam over to the transport ship, which amazingly still has power. Although life support is working, the ship seems deserted. Just then, La Forge notices that the transporters on-board have been modified somehow and that there's still a pattern stored in them. The teleporter is activated, and who else materializes on the pad but Scotty himself!

Scott explains that he was on his way to retirement when the ship crashed, and he and the only survivor, Franklin, had too few supplies to wait for rescue. Franklin's pattern has degraded too much for revival. When Scott learns that his rescuers are from the Enterprise, he assumes that Kirk has come to save him, but once he sees Worf, he realizes that he's been away much longer than he'd thought.

On the Enterprise, Scott gets introduced to the crew and is instantly fascinated by the advances in technology that have been made. Although advised by Crusher to rest, he quickly gets into Geordi's hair and insists on helping him man engineering, stating that his 52 years of experience should be worth something. Unfortunately, Scott is too unfamiliar with 24th Century technology and starts to get in the way. Geordi's patience wears thin, and he finally snaps at Scott to go away, causing the old man to leave in a huff.

Scott wanders into Ten-Forward, where he samples some synthehol and nearly spits it out. Data serves a real alcoholic drink to Scott, which Scott likes, though he mutters to himself about the future being full of "synthetic alcohol and synthetic people." After getting drunk, he stumbles to the holodeck and recreates the bridge of the original Enterprise. Scott wistfully recalls his glory days while drinking a toast to his absent comrades. But his pity party is interrupted by Picard, who downs shots of Scott's whiskey and commiserates with him. Scott says that the original Enterprise is the only ship he misses, and Picard admits that he misses his first command, the Stargazer, even though it is completely outclassed by the current Enterprise. He offers to let Scott peruse the modern tech manuals, but Scott refuses, saying that the time comes when every man has to know when to quit. He shuts off the simulation and leaves.

The following day, Picard suggests to La Forge that Scott could help recover the logs from the damaged Jenolan. He also makes a personal request that La Forge personally accompany him to make Scott feel useful again. Geordi agrees. After the pair beam over, the Enterprise moves to investigate a communications array on the Dyson sphere and gets pulled inside by automated tractor beams. The ship's systems get overloaded in the process, causing the ship to start hurtling toward the central sun with minimal power.

In the Jenolan, Scott speaks with disgust at the ship's out-of-date technology, calling it a useless relic (much like himself). Geordi counters that many principles of spacecraft have remained the same for decades and that the ship might even still be in service had it not been damaged. "Just because something's old, doesn't mean you throw it away," he says. Scott is heartily reencouraged by Geordi's arguments. When they try to contact the ship, however, they get no response. Scott realizes that the ship might have entered the sphere, so the two engineers set about repairing the derelict ship to go after it.

The Enterprise crew manages to use their remaining impulse power to enter an orbit around the star, but its violent solar flares will destroy them in three hours if they don't find a way to escape.

La Forge and Scott work on repairing the Jenolan's engines. Geordi is cautious about exceeding Starfleet regulations on deuterium, but Scott reveals that he wrote those regulations and knows exactly how far he can push them. They get the ship running, and Scott offers Geordi the command in spite of technically being the senior officer. He explains that even though he's a captain, he only ever thought of himself as an engineer. With Geordi in command, they track the Enterprise trail into the sphere. Scott proposes entering the sphere and holding the doors open with their shields to let the Enterprise out. Geordi is leery of such a cockamamie idea, but Scott assures him that it will work, so Geordi agrees.

The engineers wedge the Jenolan between the doors, the shields hold and La Forge manages to open a communications channel to the Enterprise. The starship receives the hail and sets a course for the hatch. The Jenolan suffers heavy damage while the craft is wedged in the hatch and La Forge tells Picard that the Enterprise will have to destroy the ship to escape. When the Enterprise is in transporter range of the Jenolan, Picard gives the order to beam La Forge and Scott back on board (with the Jenolan's shields still raised) and fire photon torpedoes, destroying the Jenolan. The doors continue to close, but the Enterprise manages to exit the sphere. As La Forge and Scott walk off the transporter pad, Scott is cheerfully relieved to be returned to safety.

Later, La Forge tells Scott about the Enterprise's encounter with a newborn life-form. It is obvious that a strong bond has formed between the two engineers. Scott was expecting La Forge to take him for a drink, but La Forge had different intentions. As they walk through the doors to Enterprise's shuttlebay, the senior staff is revealed, standing in front of a shuttlecraft, the Goddard. Picard offers Scott the craft on "an extended loan" basis in thanks for sacrificing the Jenolan to save the Enterprise. Scott says that he won't be going to the Norpin colony as he had first planned. The senior staff bids Scott farewell. Scott reveals his approval of the Enterprise-D and the starship's engineer. After shaking La Forge's hand, he departs the ship in his new shuttlecraft.