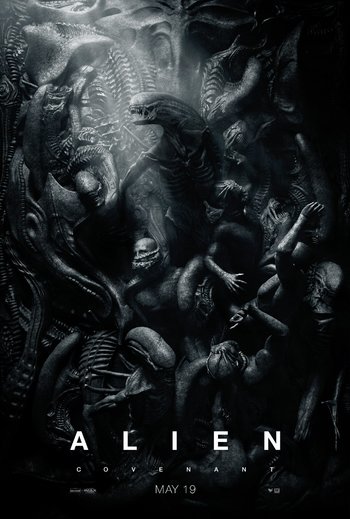 The path to paradise begins in hell.
"You've all sacrificed so much to be here. To be a part of this—the first ever large-scale colonization mission to go this far into our galaxy. We're making history, and everyone back on Earth is really grateful—for your hard work, and your courage. I just wanna say that I couldn't pick a better bunch of jerks to get marooned on a distant planet with! So, um... To the Covenant!"
— Lt. Daniels, Tempting Fate in the film's prologue

Alien: Covenant is a Sci-Fi Horror film released on May 19, 2017 directed by Ridley Scott, based on a story by Michael Green and Jack Paglen, with a screenplay by John Logan. It is the sequel to Prometheus, the prequel-turned-spinoff of the Alien series, and explores the origin of the parasitic extraterrestrial bioweapon labeled Xenomorph XX121, and mankind's first encounter with it. Katherine Waterston stars as Daniels, a crewperson onboard the colony ship Covenant. Danny McBride and James Franco also star as other members of her crew. Noomi Rapace returns as Dr Elizabeth Shaw (albeit only in promotional videos and as a cameo), and Michael Fassbender returns as David as well as playing Walter, the Covenant's resident synthetic.

Like its precursor, Alien: Covenant underwent a number of rewrites. Following Prometheus, Damon Lindelof and Ridley Scott expressed interest in diverging the series even further from the Alien saga, chronicling Elizabeth Shaw's and David's discovery of the Engineers' homeworld and why they wanted to destroy humanity. In 2015, the film's title was announced as Alien: Paradise Lost, with Scott stating that while the film would still follow Shaw and David on the Engineers' homeworld, it would in fact feature the Xenomorphs and revisit the roots of the franchise, setting up future films to serve as direct prequels to the original Alien. In November 2015, the film was retitled Alien: Covenant coinciding with a massive rewrite by John Logan. Alien: Covenant debuted theatrically in the United Kingdom on May 4, 2017, and had a North American theatrical release on May 19, 2017.

A decade after the mysterious disappearance of the Prometheus on the moon LV-223, a Weyland-Yutani colony ship called the Covenant is damaged in a solar flare and during repairs detects a distress signal from a lush, untouched paradise. However, they soon discover the android David, the sole survivor of the Prometheus, and find that their new homeworld contains a dark, dangerous secret.

A prequel was in development that will fill the gap between Prometheus and Covenant. A direct sequel to Covenant was also planned to follow this, to close out the entire tetralogy of Alien prequels. However, there were also indications that the next film will instead close out the Myth Arc of a trilogy and that subsequent movies would just tell different stories with the Xenomorphs, that FOX was reassessing the future of the series following Alien: Covenant's lacklustre fan-reception, and Ridley Scott himself again expressed interest in moving the franchise away from the Xenomorphs and focusing on David. In November 2018, an article in Empire magazine indicated a sequel was in the works, but in January 2019 Fox issued a statement that there were no new Alien films planned — effectively cancelling the prequel trilogy.

. A four-minute prologue sequence, featuring the Covenant's crew about to leave for their homeworld, can be viewed here

, while another prologue explaining what happened to Shaw and David after the end of Prometheus can be viewed here

Is not a Halo film featuring the titular alien faction nor is it a crossover with that franchise.