I Know You're Watching Me 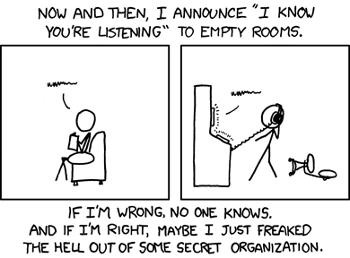 When any character is Being Watched on video surveillance and they look at the camera directly as if they know they are being watched. Usually indicates that the person being watched knows more than the audience has been led to believe, or is a threat to the people watching them. More bonus points if the person doesn't want their observers to know that they can tell they're being watched, and quickly looks away when they accidentally make eye contact with the camera.

This trope also applies to the one way windows found in interrogation rooms and other cases where someone being watched behaves in a manner that indicates they know exactly what's going on on the other side.

Compare to Poke in the Third Eye, which involves the more metaphysical forms of surveillance or generally making sure whoever's watching stops watching. Contrast Bluff the Eavesdropper. If the character knows he's being watched by the audience, then this falls underneath Breaking the Fourth Wall. See also Two-Way Tapping, when the eavesdropping people reveal themselves.