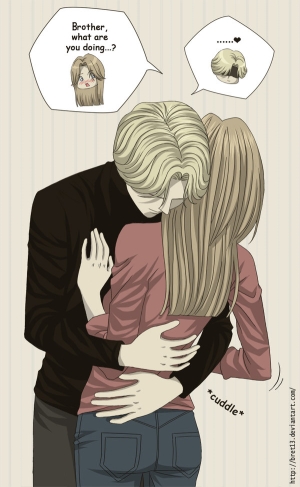 Used and edited with permission.
Advertisement:

Characters with incestuous subtext in a story. Even though incest is a taboo in many places in the world, it is not entirely impossible that accidental subtext can sneak in, either unintentionally or surreptitiously.

This can originate from the author intentionally playing with the closeness of the characters' relationship and slipping into romance, even though nothing serious was supposed to come out of it. In some works, especially comedy ones, this is usually Played for Laughs involving Lampshade Hanging, and can involve a Digging Yourself Deeper speech: "It's Not What It Looks Like! She's my sister!" "...that's DISGUSTING!"

There is another variation, when the attraction itself is textually there, but the characters are not literally blood related, so openly sexual relationships can also have incestuous subtext. For example, in Japanese works, girls might use Japanese Sibling Terminology for a guy (or especially a girl) they are in love with.

A Relative Error can come across this way (either intentionally or not) if the original "romantic" scene is a little too convincing. Compare Flirty Stepsiblings. Contrast Incest Yay Shipping, where subtext may or may not exist but fans create a relationship regardless. See also Platonic Writing, Romantic Reading for when any Incest Subtext was clearly not the intention of the writers.

And with, um, sexual tension?

The protagonist of A Christmas Puppy and his mother are...a little too close for the Cinema Snob's liking.

And with, um, sexual tension?

The protagonist of A Christmas Puppy and his mother are...a little too close for the Cinema Snob's liking.