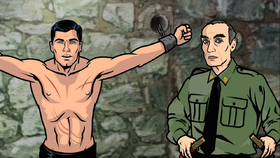 Sterling Archer, suave agent from spy organization ISIS, undergoes a torture training exercise, but causes it to be terminated after complaining about fellow agent Crenshaw's fake-torture tactics. The next day, while trying to get members of the organization to smell his dry cleaning due to its strangely curry-like odor, he is called into the office of Malory, his mother and boss, where he is chastised for misusing his ISIS expense account. He seeks assistance from Lana, his ex-girlfriend, who knocks his donuts on the floor, and Cyril, ISIS comptroller and Lana's new boyfriend, to clear his account, but he refuses. Archer tries getting secretary Cheryl to leave the mainframe open that night, allowing Archer to easily slip in and clear his account, with the excuse that he's hunting for a mole in the organization, but she too denies his request.

Without any options, Archer is forced to break into ISIS's mainframe. He assumes this will be an extremely difficult task, but discovers that actual security is appallingly terrible and he easily figures out the password to hack his account after the first try. While trying to transfer all of his excess expenses from his account to Crenshaw, Crenshaw enters the room and holds a gun up to Archer's head. He reveals that he is actually a Russian spy named Kremenski. Ever since Archer had mentioned the possibility of a mole earlier in the day, Kremenski has been afraid that he will fall under increased scrutiny and be outed as a mole, so he plans on stealing $50,000 from Archer's account and fleeing from the country. Just then, however, Lana arrives and pulls a gun on Kremenski. She and Archer begin to argue and the mole is able to escape.

They pursue him outside, where Cyril and Malory have already arrived. Kremenski grabs Malory and threatens to kill her if they do not let him leave; Archer tries to turn the tables on him by grabbing Lana and threatening to do the same, but Kremenski does not care about her well being. When Kremenski talks about killing Mallory, Lana proclaims that Archer is getting an erection, causing Kremenski to let go of Malory in disgust, allowing Archer room to shoot him several times, killing him.

Cyril comes to the conclusion that Kremenski had been stealing from Archer's account the whole time, thus giving Archer an alibi. Malory notes that she would have known if there was a mole at ISIS, her earlier phone call revealed to have been with Nikolai Jackov, head of the KGB. She changes the subject when questioned, and complains that someone left donuts on the floor attracting ants.

Archer subverts the entire 60s spy genre within the very first scene. Archer is seemingly imprisoned in a Russian cell, near-naked and with a guard threatening to torture him. Archer just snarks at the "guard's" accent, at which point we find out it was all a simulation, which Archer's mother is creepily invested in.

Archer subverts the entire 60s spy genre within the very first scene. Archer is seemingly imprisoned in a Russian cell, near-naked and with a guard threatening to torture him. Archer just snarks at the "guard's" accent, at which point we find out it was all a simulation, which Archer's mother is creepily invested in.