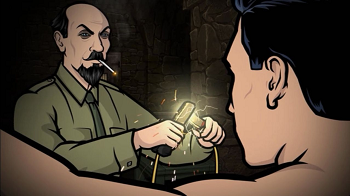 15,000 volts worth of answers.
"They say, 'Whatever doesn't kill you only makes you stronger.' But when it comes to torture devices, that's pretty much never true. The picana electrica delivers shocks at only 1/1,000 of an amp. It's completely non-lethal, but at 15,000 volts, it's so painful, you wish it was."
— Michael Westen in Burn Notice, via voice over as the device is about to be used on him
Advertisement:

Real torture techniques are messy, uncomfortable to watch, and difficult to simulate for TV. Such graphic violence would risk an undesirably restrictive MPAA rating or rejection by a network's standards. More of an immediate problem, a key character with broken limbs or open wounds would simply not be able to physically continue in the plot without a considerable healing period, of which there may be no room for on the timeline. Including a physically broken character in the plot would simply be an ongoing downer, defusing any joy the writer intended to create.

Instead, most torture sessions in TV, movies and video games takes the form of an electroshock treatment, some form of direct neural stimulation, or the ever popular Agony Beam. In any case, the point is to have the actor shake around as if in terrible pain without actually causing any physical damage. If the producers are particularly interested in realism, a pair of burns will be left where the electrodes were attached. Depending on medium and genre, this may include visible electric arcs. Sometimes parodied, but far more often played straight.

It's almost guaranteed that a variation on this conversation will take place:

Big Bad: Increase the intensity!
Torture Technician: But that could kill him!
Big Bad: DO IT!

The hero never dies or experiences serious physical injury/mutilation, and in most cases will not even show any marks, though usually requires a shoulder to help walk for another scene or so, as he is too weak to walk on his own. The hero will soon regain his strength entirely. A villain given a taste of his own medicine might die or become horribly mutilated, though.

This trope appears to be weakening in recent years after the appearance of "torture horror" films such as the Hostel series breaking into the mainstream, though this genre began back in the 1970s with films like Mark of the Devil and Salò, or the 120 Days of Sodom.

When applied properly, this method also has the added bonus of not leaving any physical evidence of torture on the bodies of the "guests". Electric torture has some side benefits to interrogators as well, as it tends to mess with brain circuitry, leading to feelings of disorientation and short term memory loss in addition to pain, which increases confusion and makes subjects more malleable. It also tends to be convenient, as it doesn't require a ton of effort on the interrogators' part and rarely requires extensive cleanup beyond the occasional loss of bowel control.

A favorite of the Psycho Electro, and a variant of Agony Beam. See also Magical Defibrillator (for the flip side of electroshocking humans), Electroconvulsive Therapy Is Torture and Harmless Electrocution. May be part of a Robotic Torture Device, and one possible misuse of a Static Stun Gun. Contrast with Electric Instant Gratification.

After taking her prisoner, Brevon uses Lilac to interrogate Torque by subjecting her to painful electric torture to make Torque give him answers.

After taking her prisoner, Brevon uses Lilac to interrogate Torque by subjecting her to painful electric torture to make Torque give him answers.