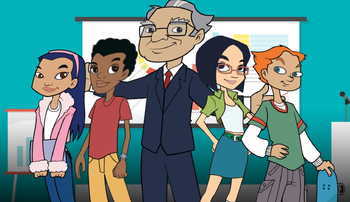 "The more you learn, the more you earn!"
— Warren Buffet
Advertisement:

Secret Millionaires Club is an American television series that aired on The Hub, and more recently Qubo. It has 26 webisodes online. It was produced by Genius Brands International.

The show is about a multi-ethnic group of clever children who receive mentoring from Real Life multi-millionaire Warren Buffet. He teaches the children lessons about the business world and about money management.