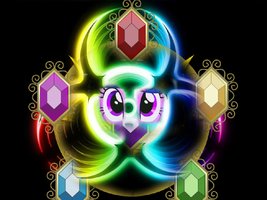 There's a darker side to harmony...
Advertisement:

The Elements of Harmony. For generations these ancient artifacts have served as the physical manifestations of Equestria's most important principles: Loyalty, honesty, generosity, kindness, laughter, and the magic of friendship itself. However, only specific ponies are capable of harnessing the Elements' power and little information on them exists in Equestrian literature. And many questions remain unanswered, but there is one above all else: what qualities, spiritual or biological, are needed to allow a pony to control the artifacts representing the Elements that protect the world, and thus assure that the world is not destroyed by the seeds of chaos? What does it take to keep harmony secure?

Twilight Sparkle doesn't know, but she intends to find out by creating her own research on the Elements and their bearers in order to achieve her own Well-Intentioned Extremist goals. But how far will she go to preserve harmony and protect the future, and how will the fate of her friends play into it?

Research, procedures from the pits of Tartarus, and a "harmonious plan" that promises to bring about a new world, that's what.

Started on July 25, 2012, by Shadowed Rainbow, Pages of Harmony is a grimdark My Little Pony: Friendship Is Magic fanfic and contains extremely graphic content. The story itself can be read here

, a reading is here

, and a short movie trailer can also be found here

. But BE WARNED you'd better know what you're getting into.

Also had a series of text-based Ask a Pony blogs: Twilight herself

(done by the author, no longer active), some of Twilight's followers

(deleted), some of Twilight's opposers

(deleted). Be warned, though they are AU to the main fic, it takes place after Chapter 12, so expect MAJOR spoilers if you haven't gotten to that point.

Has been completed as of October 2014. An attempt at a sequel, Empress of Harmony

, but never made it past one chapter.

As of 2018 it's getting a Continuity Reboot due to the original being an Old Shame.

Pages of Harmony contains examples of: