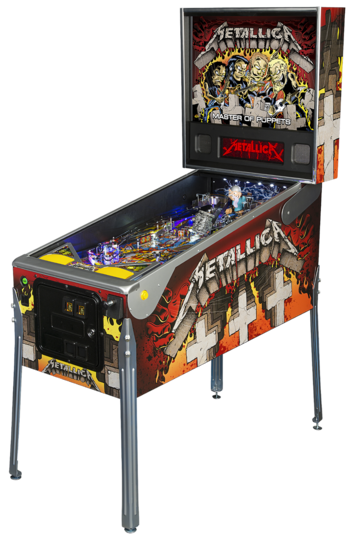 Metallica is an arcade pinball game designed by John Borg, programmed by Lyman Sheats and Lonnie Ropp, and released by Stern Pinball in 2013.

Naturally, the game is centered on the world-famous Heavy Metal band Metallica and their music. Advance the Fuel Gauge to start Fuel mode for double scores, use the Hammer to smash pinballs into the Coffin underneath the playfield, then raise the Grave Marker and prove yourself the Master of Puppets. Get the band members' guitar picks, feed the Snake, then throw the switch on Sparky's electric chair to Ride the Lightning. Good players can spell METALLICA to bring Justice For All, great players will use prodigious reflexes to Seek and Destroy, but only the best will Crank It Up and reach the End of the Line, accompanied by over a dozen of the band's best songs and original quotes from Lars, James, Kirk, and Robert.

The band often brings a table with them on tours (Kirk Hammett is a longtime pinball enthusiast), and additional tables are kept near their studios and hangouts for games between sessions.

Lars: “The snake owes me money!”