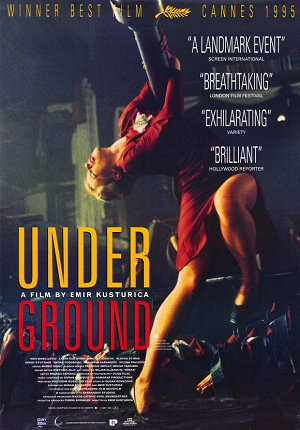 Underground is a 1995 Serbian historical comedy/drama co-written and directed by Emir Kusturica.

The plot concerns two Serbian rapscallions, Marko and Blacky, who run guns through Belgrade to fight the occupying Nazis but seem more interested in spending their profits on debauchery. When a love triangle threatens their friendship, however, the slippery Marko hatches a plot that tricks Blacky and a large portion of their friends into hiding in a large underground bunker for years, long after the war has ended. Meanwhile, Marko maintains a charade that they are still fighting Nazis above ground.

The film marked Kusturica's second Palm d'Or at Cannes, yet also sparked controversy in the Balkans over accusations that it romanticized Yugoslavia's Communist regime. The short version of the film is almost 3 hours long, but the 5-hour uncut edition was aired as a miniseries on Serbian television.