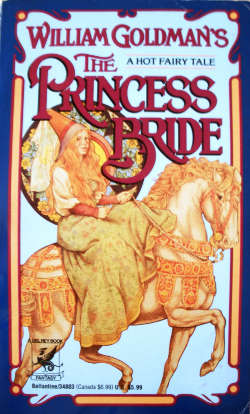 "As a matter of fact, everything Morgenstern wrote is historically accurate; read any decent book on Florinese history."
Advertisement:

A 1973 book by William Goldman, The Princess Bride is about the trials of true love in the Renaissance European nation of Florin. The story stars Buttercup, a simple yet incredibly beautiful farmgirl, and Westley, the farmhand she enjoys ordering around. Although they realize that they share the incredibly rare thing called "true love", fate conspires to keep them apart, as Westley is lost at sea.

Five years later, Prince Humperdinck, who rules Florin in place of his elderly and doddering father, decides to celebrate the kingdom's 500th anniversary by marrying Buttercup, who is now the most beautiful woman in the world. Buttercup, knowing that the Prince is well within his rights and believing she can never love again anyway, reluctantly agrees.

In a plot against the throne, Buttercup is kidnapped by the criminal trio The Sicilian Crowd (so-called because two's company and three's a crowd), consisting of Vizzini (the mastermind), Fezzik (the dumb muscle), and Inigo Montoya (the world's greatest fencer, traveling to avenge his father) — but their steps are hampered by a mysterious man in black who seems determined to stop them at all costs. The subsequent adventures are madcap, iconic, and brilliant.

The book uses a Framing Device with the author "abridging" an older story to turn a very satirical (and rather cynical) adult novel by the Florinese author S. Morgenstern into the adventure tale for children that he remembers his father reading to him as a kid.

It was later adapted by the author into a well-known film of the same name.

The new edition published for the book's 25th anniversary included additional commentary (including some remarks on the film), and a rather confusing preview chapter from a projected sequel, Buttercup's Baby, which implicitly references Goldman's unrelated novel Control.

The even newer edition for the 30th anniversary contains additional commentary about the film, as well as everything contained in the 25th-anniversary edition, resulting in three forewords. One more foreword and the 'Good Parts' version will be thicker than Morgenstern's supposed original!

The Princess Bride provides examples of:

The released portion of Buttercup's Baby provides examples of: