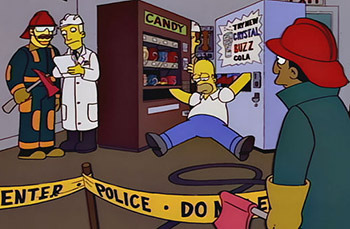 You put your change in a vending machine, you expect to get your candy, prize, or whatever you paid for. This trope is when the machine doesn't do that, or inflicts harm on you. This comes in several varieties:

Percussive Maintenance is usually involved. Will often lead to Enmity with an Object.

Coffee machines and Matter Replicators do count, and machines gaining sentience and attacking people is the Exaggerated Trope. My Car Hates Me is a sister trope. People usually apply Percussive Maintenance when they encounter an uncooperative vending machine. No Snack For You, Your Television Hates You are related.