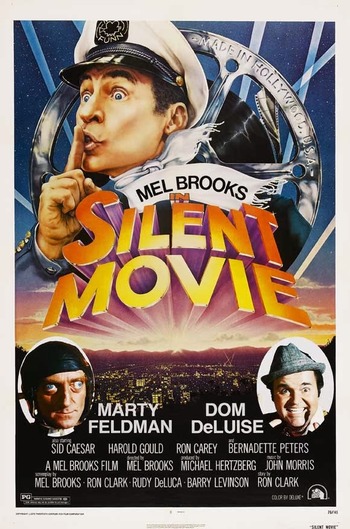 It tells the story of director Mel Funn, attempting, with the help of his friends Dom Bell and Marty Eggs, to direct the first silent film in forty years, by hiring stars Anne Bancroft, Liza Minnelli, Burt Reynolds, James Caan, Marcel Marceau and Paul Newman to play in it, in order to prevent a hostile takeover on his producer's company, Big Pictures Studio, by the evil conglomerate Engulf & Devour. Hilarity and over the top Slapstick ensue.

The movie officially holds the Guinness World Record as the sound film with the least spoken dialogue— a single one-syllable word, produced at the funniest possible moment from the least likely person. Let's just say, the whole movie may or may not be just an elaborate and clever setup to the funniest verbal joke involving a famous French mime ever.

Unrelated to Scary Movie or the Seltzer and Friedberg "Movie Movies", although the naming convention is broadly similar. For the medium this film tips its hat to, see Silent Movie.