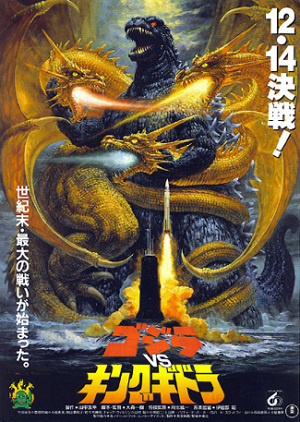 "I nearly died on Lagos Island, along with my entire garrison, but the dinosaur saved us all. Now all the prosperity that I built... it's being destroyed by the very same dinosaur as we speak. How ironic!"
— Yasuaki Shindo
Advertisement:

Godzilla vs. King Ghidorah is the 1991 sequel to Godzilla vs. Biollante, the eighteenth Godzilla film and the third in the Heisei series. The film is written and directed by Kazuki Omori, who took the roles from the previous film.

Though the Biollante film was creative, it didn't exactly rake in the yen. After some legal wrangling in a failed attempt to remake King Kong vs. Godzilla for Toho's 60th anniversary Milestone Celebration, Toho instead settled on bringing back Godzilla's Arch-Enemy, King Ghidorah.

The film explored the origins of Godzilla, and the plot was influenced by Japan's growing influence and the fear that Japan Takes Over the World (or rather, the Japanese reaction to said fear). It has been accused of being anti-American, with the portrayal of American soldiers in World War II and the antagonists being Western Terrorists from the future, though the director said it wasn't an Anti-American film. At any rate, this entry did well at the box office, inspiring the return of other old Godzilla foes in future films.

The Futurians—consisting of Wilson (Chuck Wilson), Grenchiko (Richard Berger), Emmy Kano (Anna Nakagawa) and the android M-11 (Robert Scott Field)—offer to erase Godzilla (Kenpachiro Satsuma) from history, under the claim that in their time, Japan had long since been destroyed by the radioactive beast. After going further back in time to World War II and observing the dinosaur that would become the King of the Monsters save a Japanese brigade from the Americans, they teleport Godzillasaurus (Wataru Fukuda) into the sea.

But another monster takes his place: King Ghidorah (Hurricane Ryu), a mutation of three pets of the Futurians called Dorats that were left on the island to be irradiated. The Futurians use King Ghidorah to terrorize Japan, so as to prevent the Japanese Empire from being born. With the help of a renegade Futurian, our human heroes lay their hopes in reviving Godzilla. But would it be wise in reviving such a destructive monster? And if the past had been changed, how do they still remember the King of the Monsters...

The film was released on December 14, 1991. It's story is followed by Godzilla and Mothra: The Battle for Earth.