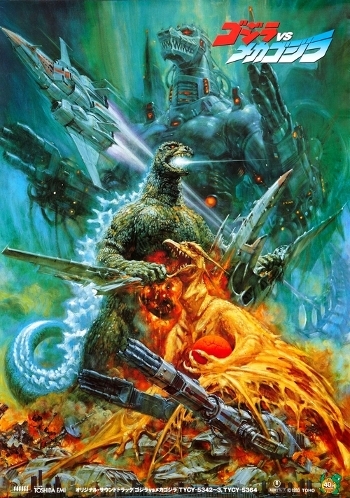 "This time, we will destroy it..."
— Commander Aso
Advertisement:

Instead of being made by aliens, MechaGodzilla is portrayed as an Earth creation reverse engineered from the robotic parts of Mecha-King Ghidorah. Rodan also returns, as does the concept of Godzilla having a son. Godzilla was originally supposed to die in this film, but that was changed. The film had a strong box office reception. While story flaws were noted, the film, and its soundtrack specificially, are well reviewed.

In order to defeat Godzilla once and for all, the UNGCC (United Nations Godzilla Countermeasure Center) analyses the Futurians' technology from Mecha-King Ghidorah in order to build MechaGodzilla. Meanwhile, scientists investigate Adona Island and discover a enormous egg. They flee with the egg when Rodan attacks, only for Rodan to be mortally wounded by Godzilla.

The egg hatches into BabyGodzilla, a plant-eating Godzillasaur that's completely benign to humans. But Godzilla senses him and lays destruction as he makes a beeline toward him. MechaGodzilla is deployed and after an initial one-sided match, Godzilla bests him. The scientists manage to hide BabyGodzilla from Godzilla's senses, though, so the King of the Monsters retreats.

As MechaGodzilla is repaired and modified to combine with the rejected Garuda machine, the study of BabyGodzilla yields to a discovery that could finish Godzilla once and for all. But when Rodan revives and plans to get back his half-brother, what can our heroes do? And can MechaGodzilla kill Godzilla when an unlikely ally comes to his rescue?

Followed by Godzilla vs. SpaceGodzilla.