Music / The Number of the Beast 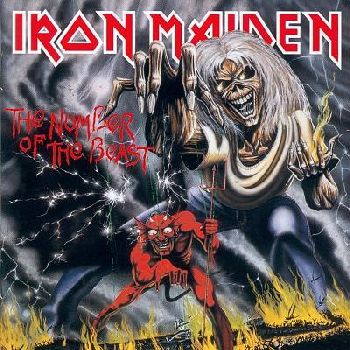 The Number of the Beast is the third studio album by British heavy metal band Iron Maiden, released in 1982. Frequently regarded as a classic of the heavy metal genre, and a quintessential addition to any metalhead's collection.

The album marked the debut of group's most iconic vocalist, Bruce Dickinson after leaving his previous band Samson, and was also the final album that drummer Clive Burr played on note whose ousting from the band varies by source. The Number of the Beast sees Steve Harris' songwriting taking a more complex direction than previous efforts, which harmonised well with Dickinson's powerful, operatic voice. Thanks to this, it bridges the rawer, punk-like stylings seen on Killers and Iron Maiden with the progressive elements their career would later take, punctuated by Burr's wild, blistering precision-drumming. It was also the first album to contain writing contributions by Adrian Smith (which most assuredly wouldn't be his last).It drew controversy among Moral Guardians for its lyrical content and artwork, which got the band accused of being Satanists, and later led to protests outside their shows and public burnings of their albums. This may not have been such a bad thing, though.note Harris later commented on the controversy, saying "It was mad. They completely got the wrong end of the stick. They obviously hadn't read the lyrics. They just wanted to believe all that rubbish about us being Satanists"

Charting in many regions (including a #1 in the UK) and selling 14 million copies sold worldwide as of 2010, the album was a Breakthrough Hit for the band. To this day several of its tracks are among the most-played concert staples in the band's catalogue, with the songs "Run to the Hills" and "The Number of the Beast" both frequently considered contenders for Signature Song status.

It was also honored by the TV documentary series Classic Albums with an entire episode about the creative process behind recording this classic album.

Hallowed Be Thy Tropes: