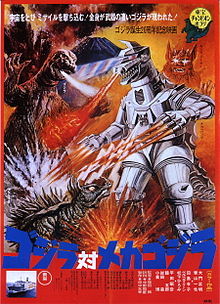 Both of the prophecies above are put to the test in Godzilla's 20th anniversary outing, Godzilla vs. Mechagodzilla (Gojira Tai Mekagojira, not to be confused with the Heisei and Millenium films). The monster that will try to save the people of Okinawa is King Caesar, the ancient guardian of the Azumi Royal Family. The monster that will destroy the world... is at first believed to be Godzilla, but after Godzilla's ally Anguirus is brutally attacked and wounded by the beast, people start to notice that something is off. When Godzilla attacks a refinery, another Godzilla appears. A vicious battle soon follows, where the first Godzilla soon sheds its skin in a fiery display to reveal a mechanical weapon of destruction: Mechagodzilla. The resulting battle ends in a draw, but questions remain. Who built Mechagodzilla, and why?

The answer to the above questions is that a race of aliens from "The Third Planet of the Black Hole," or Simians, have come to Earth to setup a new home for themselves. Instead of asking nicely, however, they've decided that the best option is to use Mechagodzilla to destroy a sizable portion of Japan to make way for their own settlement.

However, there is still the issue of the Azumi prophecy, and with it, King Caesar. If King Caesar can be awakened, then other monsters may soon follow, and so the Simians attempt to gain control of a precious statue that is instrumental to the legend to prevent the divine monster's awakening. Deciding to launch a two-pronged plan, the Simians capture an Earth scientist who is familiar with the technology they used to create Mechagodzilla, to speed up repairs, and send their own agents out to capture that damn statue. What follows are gunfights, INTERPOL agents with some bad hair-dos, and archaeologists fighting in a race against time to awaken King Caesar and stop the Simians. Fortunately, Godzilla is still alive, but will he be able to rejoin the fray before it's too late?

Well, yeah, of course he will.

Godzilla vs. Mechagodzilla was released in 1974, as the 14th Godzilla movie and in honor of the King of the Monsters' twentieth birthday. The film was directed by Jun Fukuda, with music by Masaru Sato and SFX work by Teruyoshi Nakano.

Followed by its direct sequel, Terror of Mechagodzilla.

Godzilla vs. Mechagodzilla features examples of: