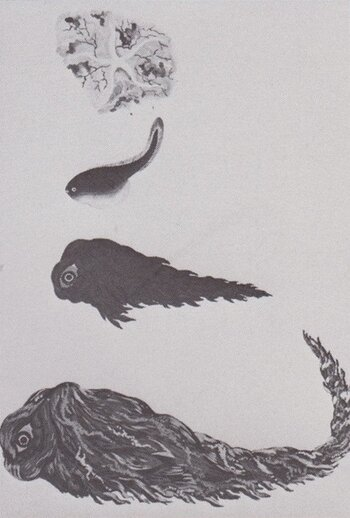 In most cases, you can expect the child form of a creature and the adult form of a creature to be rather similar. Kittens look like cats, puppies look like dogs, etc. This isn't always the case, though, such as in certain insects that go through metamorphosis. The most obvious example is caterpillars becoming butterflies, but there are even weirder examples.

Naturally, fiction has played with the concept. It's not an uncommon occurrence for parasitic grubs to become giant lizards, or fuzzy rabbitlike creatures to grow up to become bearlike behemoths. If you weren't told they were the same creature, you never would believe it.

Naturally, the most extreme cases present a problem for artists. How do you go about creating the intermediate stage between an insect and a dragon? In many cases, they don't bother. The transitional stages are either never shown onscreen, or the creature will use a form of cocooning that prevents the audience from seeing its metamorphosis.

If the adult form is significantly stronger, this can act as a species-wide Magikarp Power, but sometimes the different forms are dangerous in different ways. While this is often used for a species-wide One-Winged Angel or to introduce more powerful forms of old enemies, occasionally it's just for weirdness' sake.