Film / Godzilla and Mothra: The Battle for Earth 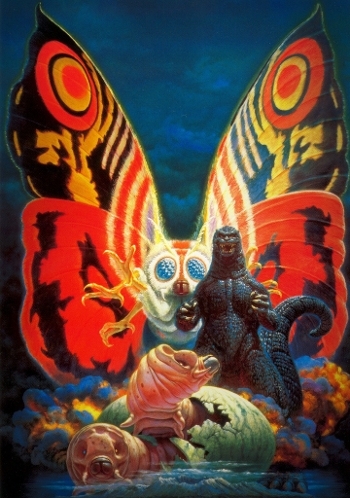 "There isn't a job that's too tough for me... except for this one time, when I was married to a real stubborn woman."
— Takuya Fujito
Advertisement:

After the success of the previous film, Toho decided to bring back another familiar monster. While there are similarities to Mothra vs. Godzilla, such as greedy businessmen and kidnapped fairies, the film is its own animal. The film sold well and became the most popular entry in the Heisei series.

A meteor hits the ocean, causing many natural disasters. Repenting tomb raider Takuya Fujito (Tetsuya Bessho), his ex-wife Masako Tezuka (Satomi Kobayashi), and Marutomo secretary Kenji Ando (Takehiro Murata) are sent to investigate the effects on Infant Island. There, they find a giant egg and the Cosmos (Keiko Imamura and Sayaka Osawa), a pair of tiny twin girls whose role is to watch over the balance of nature and who are the Last of Their Kind.

They tell of an ancient civilization who worshiped Mothra and were scientifically advanced. When they created a weather machine, the Earth was angered so much that it created a dark version of their god called Battra. Battra proved to be so bloodthirsty that Mothra was forced into a battle with him. After the fierce clash, Mothra managed to sink Battra in the Arctic ice. Mothra is once again having to become active because of the environmental problems plagueing the Earth.

The Cosmos agree to go to Japan with the giant egg, but Godzilla intercepts them. Mothra hatches and gets saved from Godzilla (Kenpachiro Satsuma) when a revived Battra clashes with the King of the Monsters. They are sucked into the earth by a underwater eruption and Mothra leaves.

The Cosmos are kidnapped by the company secretary, whose CEO plans to exploit them for all they are worth. But Mothra won't stand for this and is heading for Tokyo. Can our heroes rescue the Cosmos before Mothra does too much damage? And how would they deal with Godzilla and Battra, who have survived being swallowed by lava and are converging on the area?

It was followed by Godzilla vs. Mechagodzilla II.