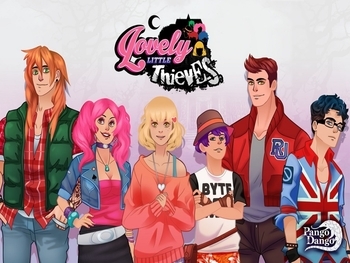 Lovely Little Thieves is a Ren'Py-based Visual Novel currently in development by PangoDango Games. It was originally set for release in fall 2015, but has since been pushed back to some point in the future for reasons explained here

At its core a tribute to the classic Slasher Movies of The '80s, the story follows the college student Dawn, as her and five peers are on a road trip from Rhode Island down to Daytona Beach for spring break. Not one day into the long drive, however, the group’s van breaks down in the middle of a thick forest in northern Virginia. With no help in sight and the sun rapidly setting, the gang scouts the forest, and finds a dilapidated hilltop mansion, marked only with the number "72."

The strange house triggers a horrible flash of recognition in Dawn, as she has recently been plagued by nightmares of an eerily similar place and a strange and powerful creature with red eyes tormenting her. But her friends, desperate for shelter, decides go inside. But after they encounter a mysteriously ancient corpse propped up in the dining room, they soon find that the mansion refuses to let them leave again, as all exits are suddenly blocked by what appear to be a supernatural force. What's worse, the assumed house number "72" turns out to be another warning: the number warps and shifts lower every hour, counting down to an unknown fate at the end of their 3-day visit. She doesn't know it yet, but the lives of her companions are in Dawn's hands...

The Kickstarter campaign for the game is here

. A demo, containing the first section of the game, is currently available here

. The developer's Tumblr page about the game can be found here

This Visual Novel contains instances of: