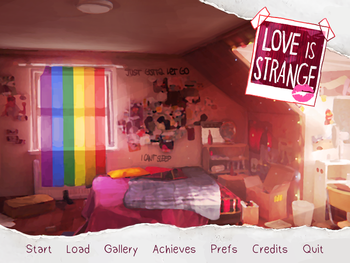 A Lighter and Softer week for Arcadia Bay.
Advertisement:

and based on the Video Game Life Is Strange, but with the dark and supernatural elements excised and the Queer Romance brought to the fore. Compared to most such fan VNs, the production quality is extremely high, boasting 150,000 words of text and a complete original set of backgrounds and soundtrack, not to mention a whole host of other cool elements that are definitely not Ren'Py standard, such as in-game achievements and a continually-updating journal.

It's Max Caulfield's second year at Blackwell Academy. On this day, she does not discover that she has magical powers that allow her to turn back time, and nor does she learn about a popular girl who went missing six months ago — magic doesn't exist, and the girl is alive and well just down the hallway. Instead, she shows up to class as usual, to find that their teacher is running a photography competition.

The theme is "bonds" — and, fittingly, it must be completed in pairs. Thus Max gets a choice. Does she work with her rebellious, blunt childhood friend Chloe (with whom she recently reunited)? Her new friend Kate, a kind Christian student with a talent for art? Chloe's friend Rachel, a beautiful but mysterious girl who seems to be loved by everyone? Or Max's rival, the sharp-tongued and ambitious Victoria? Whoever she chooses, over the next few days, Max will have the opportunity to create a winning photo — and become much closer to one of her classmates than ever before.

Love Is Strange provides examples of: