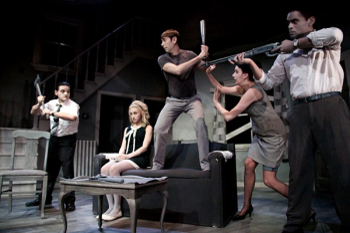 "When I looked up, I saw my colleagues going this way. You learn that a leader without followers is simply a man taking a walk."
— John Boehner, House speaker, on being asked why he allowed the 2011 government shutdown
Advertisement:

The opposite of Locked in a Room: the ensemble of diverse characters starts to argue and turn against each other during intense situations. E.g. being boarded up in a house/building/store when there are rampaging viruses / zombies / aliens / vampires / werewolves or what have you looming outside (or inside) trying to get to you. Which leads to paranoia, frustration, and disagreement among the group when it comes to fixing the dilemma. Patience starts to run short, the ensemble is starting to get on each other's nerves, and things quickly get out of hand and possibly implode.

When this occurs against something threatening to wipe out humanity as a whole (such as the ever-popular Zombie Apocalypse), this usually leads to An Aesop for the survivors (or the audience) about how we need to look beyond our differences and focus on the big picture, or a scathing indictment of humanity's self-destructiveness and how we can sometimes be even worse than the monsters we're fighting. This trope is also a good way to showcase the darker side of characters under stressful situations who are otherwise good people. This also can be caused by clashing egos, but mostly it's due to conflicting personalities.

This trope is named for a famous Biblical quote that Lincoln later borrowed about how "a house divided against itself cannot stand," though it is also referred to in writing circles as "Scorpions in a Box" (not to be confused with Rats in a Box, which is when this trope is invoked for the purposes of Perp Sweating).

This is frequently combined with an Ontological Mystery.

Subtrope of Divided We Fall. May be caused by an Artifact of Attraction or other Apple of Discord. Compare Gold Fever (greed may cause infighting) or No Honor Among Thieves (lack of loyalty may sink villains' plan because they can't work together). When this erupts into a full-scale war, particularly within a country, you have a Civil War.

Occasionally, a villain will try to set this up deliberately. This rarely works, at least not over the long term (though it can and often does work splendidly over the short term). See also: We ARE Struggling Together making this Truth in Television... unfortunately.

Typical character types that are found in this trope are: