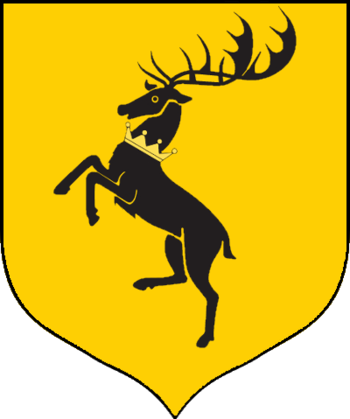 "Ours is the Fury."
"The Starks fight the Lannisters. The Baratheons fight each other."
— Daenerys Targaryen

The youngest Great House of Westeros. Descended from Orys Baratheon, the best friend of King Aegon I Targaryen and the nation's first Hand of the King. It traditionally rules over the Stormlands, to the south of the capital of the Seven Kingdoms, after Orys slew their former high lord during the War of Conquest.

Seventeen years before the start of the show, House Baratheon led a rebellion that overthrew the Targaryen dynasty and claimed the Iron Throne for itself, but had to rely on the wealthy House Lannister of the West to cement its power. The revelation that King Robert's children are not really his leads the remaining Baratheons to rise in rebellion once again.

With the death of all of its legitimate members, as of 303 AL House Baratheon was technically extinct, along with its branches House Baratheon of King's Landing and House Baratheon of Dragonstone, until the sole unacknowledged bastard Gendry, whose father was their prior leader Robert, was granted Lordship of Storm's End and became legitimized as a Baratheon. 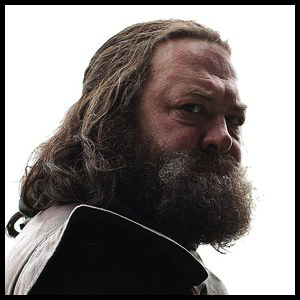 "I'm not trying to honor you. I'm trying to get you to run my kingdom while I can eat, drink and whore my way to an early grave."

"[Robert] was a good man. A great warrior. And a terrible king."
— Barristan Selmy

King of the Andals and the Rhoynar and the First Men, Lord of the Seven Kingdoms and Protector of the Realm at the beginning of the series. Before the series began, Robert led a rebellion against the ruling House Targaryen, after the Mad King Aerys II burned Rickard and Brandon Stark, and then called for Robert and Ned's heads after his eldest son Rhaegar kidnapped Robert's betrothed, Lyanna Stark, Eddard Stark's sister. Robert, Ned, and their allies won the war, making Robert king. Robert slew Rhaegar with his own hand, but Lyanna still died, under mysterious circumstances known only to Ned, who refuses to speak of the experience. Robert is the best friend of and grew up with Ned Stark, as wards of Lord Jon Arryn, who became King Robert's Hand of the King, and whose death triggers the plot of the series. 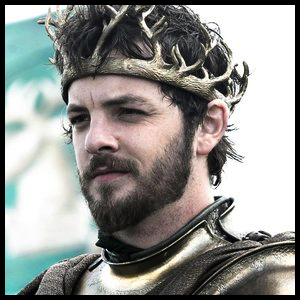 "[Stannis] inspires no love nor loyalty. He is not a king. I am."

Robert's youngest brother, Lord of Storm's End, and Master of Laws on Robert's Small Council. Fourth in line for the throne according to the Lannisters, second in line due to Joffrey and Tommen's real heritage. Claims the title because he thinks he would make a better King than Stannis. He allies with the mighty House Tyrell of the Reach, and begins the War of the Five Kings with by far the largest army, but he is murdered by Lady Melisandre's sorcerously-created shadow assassin before he can engage either the Lannisters or his brother, causing the Tyrells to become neutral once more, and the Stormlands to join Stannis. 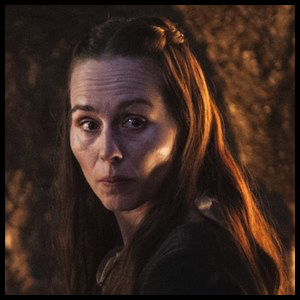 "No act done in the service of the Lord of Light can ever be a sin."

Stannis Baratheon's wife. She hails from House Florent, a noble house of the Reach and vassals of House Tyrell, though they have declared for Stannis after Renly's death instead of siding with the Lannisters like the Tyrells themselves. 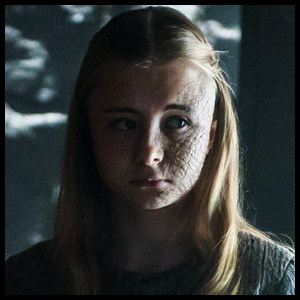 "You're your father's daughter, no mistake. Bloody relentless, the both of you."
— Ser Davos Seaworth

Stannis Baratheon's only daughter with Queen Selyse. Her face was marred by greyscale she had as a baby.

"My father used to tell me boredom indicates a lack of inner resources."
— Stannis Baratheon

The late father of Robert, Stannis and Renly and former head of House Baratheon. He perished at sea in sight of his castle, Storm's End, along with his wife Lady Cassana.

The Baratheons of King's Landing claim to be a branch of House Baratheon of Storm's End and Dragonstone, and claim descent from King Robert Baratheon, but the houses share no blood. All members of House Baratheon of King's Landing are bastard children born of incest between Cersei and Ser Jaime Lannister, the Kingslayer, and are therefore better characterized as a branch of House Lannister. Despite their illegitimacy, they successfully usurped the throne. 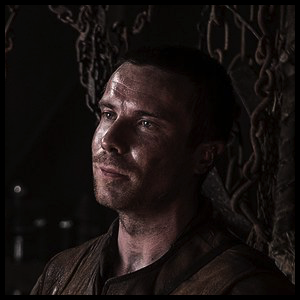 "When I hit that steel it sings. Are you gonna sing when I hit you?"

An unacknowledged bastard son of King Robert Baratheon who works as an armourer's apprentice. Befriends Arya when they both have to flee King's Landing in Yoren's group of Night's Watch recruits. 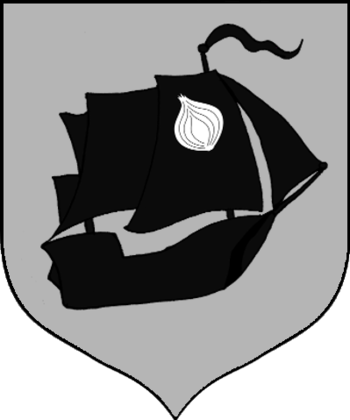 Stannis: I admire you, Ser Davos.
Davos: I thank you, Your Grace. Pleased ta hear it.
Stannis: Some highborn fools call you Onion Knight and think they insult you, so you take the onion for your sigil, sew it on your coat, fly the onion flag.

A young, landed, knightly house sworn to House Baratheon of Storm's End. Davos Seaworth was raised to knighthood and given choice lands in the Stormlands for running the Tyrell blockade of Storm's End with supplies during Robert's Rebellion. 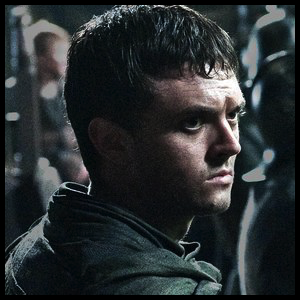 "Every night when you were at sea, I lighted a candle, and I prayed, for you."

Matthos Seaworth: Stannis is my king, but he's only a man.
Davos Seaworth: Don't tell him that. 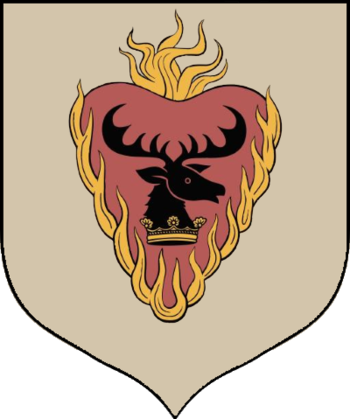 Renly Baratheon: Why is your stag on fire?
Melisandre: The King has taken for his sigil the fiery heart of the Lord of Light.

The remaining characters in service to Stannis Baratheon, a motley assortment of religious fanatics, pirates, and opportunists. 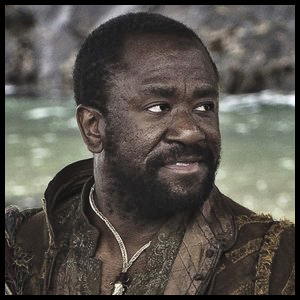 "What is the world coming to when smugglers must vouch for the honor of kings?"

"Salladhor Saan is a good name for songs."

A powerful Lysene pirate and mercenary. Also old friend of Davos. Initially hired by Stannis as a mercenary, Salladhor left Stannis's service after his defeat at the Battle of the Blackwater. Salladhor is then rehired by Stannis with gold loaned from the Iron Bank of Braavos. 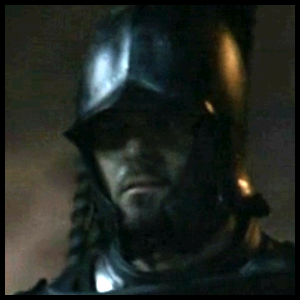 A member of House Florent and brother of Queen Selyse. Serves as Stannis's second aboard the Fury during the Battle of the Blackwater. Now presumably head of House Florent, in the aftermath of Lord Axell's death.

Lord of Brightwater Keep and head of House Florent. Initially pledged to Renly in the War of the Five Kings, despite being Stannis's brother-in-law. As Selyse's eldest brother, his house was one of the few Reach houses to join Stannis after Renly's death, and by far the most important. He was burned at the stake for apostasy from R'hllor, on the orders of Lady Melisandre.

Stannis's subordinate during the last stages of the march to Winterfell.

Lord of Evenfall Hall and head of House Tarth. His house rules over the island of Tarth, known as the Sapphire Isle, north of Shipbreaker Bay off the coast near Storm's End. Known as the Evenstar. Initially pledged to Renly in the War of the Five Kings, he joined Stannis along with most of the rest of the Stormlords after Renly's death. It is unclear whether he still owes allegiance to Stannis or, after the Blackwater, bent the knee to the Iron Throne.

Lord of Blackhaven in the Dornish Marches and head of House Dondarrion. Known as the Lightning Lord, he was dispatched by Eddard Stark to execute Gregor Clegane for his crimes in the Riverlands. After the deaths of Stark and Robert Baratheon, the remains of Dondarrion's force became the insurgent Brotherhood Without Banners. He owes no allegiance to Stannis, though both are devotees of R'hllor, have common enemies, and have worked together through Thoros of Myr and Lady Melisandre.