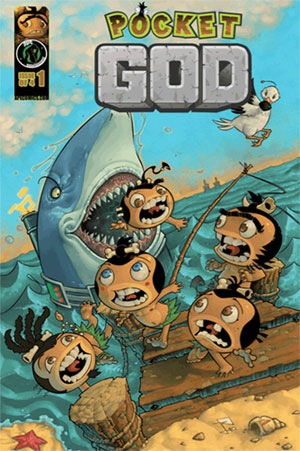 Just a typical day for the pygmies.
Advertisement:

Pocket God Comics is a digital comic book adaptation of the Pocket God video game for iPhone and iPad.

The series follows the adventures of a tribe of pygmies who can resurrect from death with the help of their Gem of Life. Unfortunately for them, they die a lot.

Originally planned as a four-issue miniseries, the comic was very well-received and was made into an ongoing series. Bolt Creative, the creators of Pocket God, has a website here

, where you can order print copies of the comics.