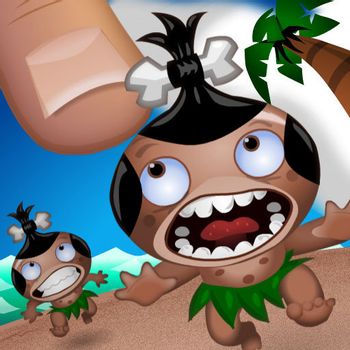 In Ep 1, all you could do was pick the Pygmies up and throw them. Seriously.
What kind of god would you be? Benevolent or vengeful? Play Pocket God and discover the answer within yourself.
—Bolt Creative
Advertisement:

Pocket God is a smash-hit app and god game for the iPod Touch/iPhone. The app was created by Dave Castelnuovo and Allan Dye, of Bolt Creative, a San Francisco-based developer. In Pocket God, you play as a god who has control over a race of islanders called "Pygmies". You can reward them with gifts or kill them. There can be up to six pygmies at a time and if killed, you can bring them back. You also have control over other things as well, such as animals and the weather. The app is constantly updating and has had forty-seven episodes released so far. Plenty more are to come.

The app has recieved a comic book adaptation, which has been well received.

It has received a sequel/spin-off known as "Pocket God: Journey To Uranus".