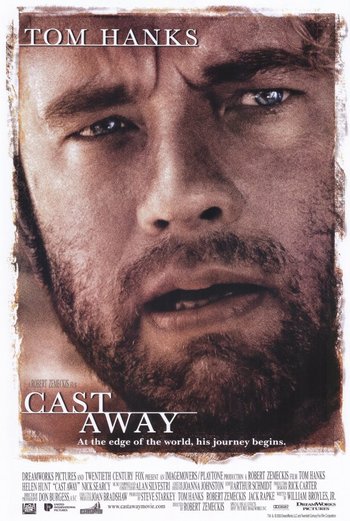 Cast Away is a 2000 film directed by Robert Zemeckis, written by William Broyles Jr. and starring Tom Hanks.

Chuck Noland has everything: success in a high-pressure, high-paying job with FedEx, close friends, and a woman who loves him. The only thing he doesn't have enough of... is time. This changes when he is in a plane crash and, finding himself the sole survivor, washes up on an uninhabited tropical island where he has to figure out how to survive. Now Chuck has all the time he could ever want... and nothing else but his own wits and his two hands.

In many ways, it's like an updated version of Robinson Crusoe. The film was a massive commercial and critical success, with Hanks being praised (and eventually nominated for the Best Actor Oscar) for his performance, which required him to undergo a drastic physical transformation and spend the majority of the film alone on screen.

This was Zemeckis' second live-action film after What Lies Beneath and his last overall to be made during the 2000s, the rest of which he spent making Motion Capture films before returning to live-action twelve years later with Flight.

Cast Away provides examples of: