Our Gods Are Different 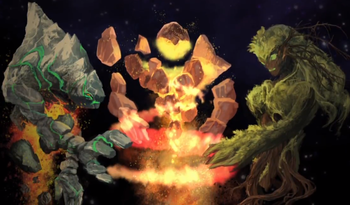 L — R: Ful (constancy and fire), Jas (sand, air and progression), and Bik (alteration and earth).
"And when they heard these sayings, they were full of wrath, and cried out, saying, Great is Diana of the Ephesians."
— Acts 19:28, The Bible
Advertisement:

Gods. What is meant by that word?

In fiction? It could mean anything. There really aren't many similarities between gods. Lots of tropes go with gods and religion. A god might be the classical God of ethical monotheism: omnipotent, omniscient and infinitely good. That's on one end of the scale. On the other end, she might be an easily embarrassed teenage girl. Or he might be a Superhero that, despite his godhood, gets beaten up by people empowered by radioactive slime.

A general minimum requirement for a character to be considered divine, though, is that regardless of their power level and number and conviction of their followers (if any) the narrative should acknowledge them as an actual god at some point. Without that, "mere" sufficiently advanced aliens, eldritch abominations, angels in many cases, and of course mortal pretenders to the title do not usually qualify.

Another trait almost universally associated with gods is having a divine portfolio or sphere of influence — that is, the thing(s) they are the gods of. (The main exception would be in the case of a monotheist capital-G God, who can go without an explicit job description by virtue of lacking competition and generally already being the "god of everything" anyway.)

In some settings, gods are omnipotent, strange, or scary; in others, they are basically just people, and sometimes not even particularly powerful ones. In some, just thinking about them can drive you mad.

Basically, gods can be distinguished based on several criteria:

Power
How powerful is the god? What can they achieve? This ranges from ...

Immortality
Gods are almost always immortal. However, the meaning of "immortal" changes from context to context.

Needs
Gods have been known to need or not need certain things.

Anthropomorphism
How "human" is the god? This deals more with emotion and personality rather than power. An omnipotent god can remain scarily human (such as Haruhi Suzumiya). A few possible variations:

Morality
Gods can be moral or immoral or neither.

Numbers
How many gods are there?

Place in the Universe
Where do gods come from and what do they do? This is a catch-all category for what gods do. Questions that can be raised are:

For related tropes, see God Tropes and Tropes of the Divine.

Alternative Title(s): Our Gods Are Greater