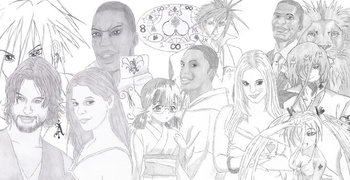 "Power is a gem of necessity. Without observing power, identity remains undiscovered"
♠The Ace of Spades♠, the in-universe author/narrator of Heir to the Stars, has left his station after creating seven possible successors.
Advertisement:

The resulting reality-tearing struggle between various characters striving to ascend to his throne leads to everyone essentially killing everyone else.

Heir to the Stars, more commonly referred to as the Suggsverse, is an infamous collection of works written and published by underground/outsider author Lionel Suggs. Essentially written as an investigation into the rhetoric of internet battleboard culture, the work, while heavily criticized for various stylistic and technical issues, represents what is quite possibly the greatest conception of superheroic power in current fiction.