Western Animation / Off the Air 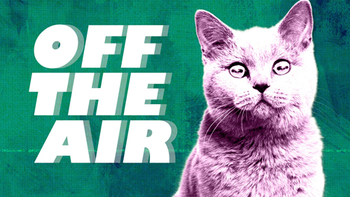 "We'd like to thank you for watching. And please... Don't... Die... Tonight."note Said in the opening short of the pilot episode "Animals"... and is immediately followed by a jumpscare.

Off the Air is a series of Quarter Hour Shorts on [adult swim]. It's essentially a series of animated (and sometimes live-action) shorts centered on a particular theme. That being said, the shorts tend to be very bizarre and/or disturbing.

If you're looking for the SMPTE color bars (which this wiki doesn't have a page for), please consult the other wiki.