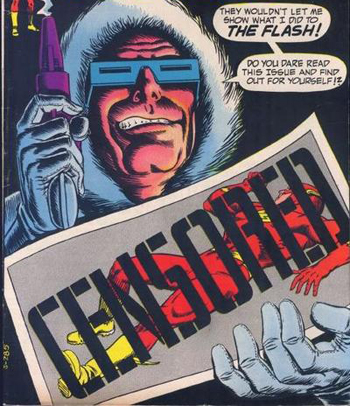 Blast, I can't make out anything behind those giant letters! Is the Flash decapitated? Dismembered? I can't tell!
"Whoever came up with this is an ass[bleep]! Ass!... Hole?... Ass[bleep]! ...Television makes a lot of sense."
— The Angry Video Game Nerd, "Episode 90: Action 52"
Advertisement:

An instance where a work is censored so randomly or ineffectually that the attempted censorship doesn't hide anything and makes you, the viewer, wonder why they even bothered. Perhaps the Censor Box is so small that you can clearly see what's behind it, or a word is bleeped out in some scenes but not in others. Maybe they cut out all the swearing but left in that scene with the women's nudist colony and the tub of bacon grease. At any rate, it's clear that the work is supposed to be censored but ultimately nothing is actually concealed.

This trope can occur because of simple incompetence on the censors' part, but it tends to occur on purpose just as often as not. It can be a way of getting back at the Moral Guardians — fulfilling their demand for censorship in a perfunctory and half-asterisked way. This trope can also be Played for Laughs if the writers just want to mess around with the admittedly-funny bleep noises. Alternatively, the writers may "censor" perfectly innocuous content and invite the viewer to imagine something naughty in its place. And on top of all that, inconsistency in the censorship may be the result of a Censor Decoy — an earlier version of the work that was blatantly offensive in order to make the work the writers wanted to produce seem tamer.

Compare Clumsy Copyright Censorship, Curse Cut Short, and Narrative Profanity Filter. See also Censored for Comedy, which is what this trope can become. Sometimes overlaps with Never Say "Die" when death occurs onscreen, but nobody is allowed to actually say the words.