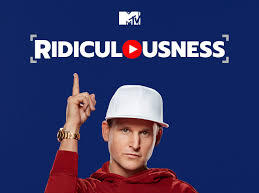 Ridiculousness is an American comedy clip show in the vein of America's Funniest Home Videos and Tosh.0 that began airing on MTV in 2011 and is currently airing its 23rd season. Rob Dyrdek serves as the host, with actor/comedian Sterling "Steelo" Brim and musician Chanel West Coast serving as co-hosts.

The show is dedicated to showing viral videos from the Internet, packaged in compilations with recurring themes and usually involving people getting themselves hurt in failed DIY stunts, to which Rob and his panelists react and joke. Steelo additionally controls the playback of the videos with a player, being able to pause, rewind or highlight specific parts of the video for extra comedy. Celebrity guests are routinely welcomed in on the fun, although episodes can consist of just the three on rare occasion.

The success of the show has spawned a massive Cash-Cow Franchise for MTV. Anyone with even a passing viewership of the network since the late 2010s can bear witness to the borderline-obsessive levels of adoration it has for the show, as reruns have frequently been aired uninterrupted across several days, at one point in August 2020 being run nonstop for 36 hours. Many attribute this to the show's structure — lack of a storyline, lowbrow content, and consistent formula — being able to generate a lot of advertising money for MTV in reruns, with the network being able to easily edit reruns as they see fit with no real impact on the content.

On top of this, apart from the many international versions that have premiered since Ridiculousness began, four spinoff series (all with a recurring -ness suffix in their name) also premiered in America:

MTV and the producers refuse any video submissions, both for the safety of their viewers and their preference to license already-existing content, as is made clear by the two disclaimers shown at the start and end of every episode.

This Show provides examples of:

Reminder: MTV and the producers insist that no one submit any videos of themselves or others performing any dangerous activities. We will not open or view them.