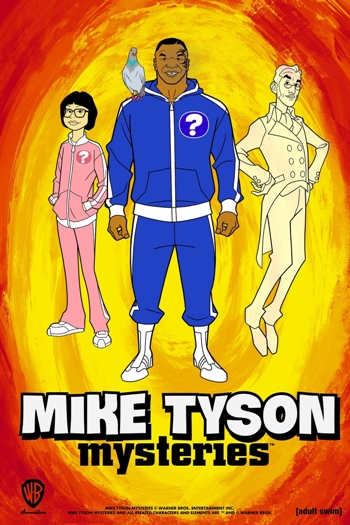 (Mike nearly drives his van off the side of a bridge)
Mike Tyson: Well team, looks like we've got another mystery to solve.
Yung Hee: No, dad, you're just a bad driver, and now we're going to die!
Mike: No, Yung, we're not going to die, CAUSE THIS IS A FUCKING CARTOON!
Advertisement:

Mike Tyson Mysteries is an animated series on Adult Swim which ran from 2014 to 2020. It's the first show for that network to be produced exclusively for AS by Warner Bros. Animation (the ThunderCats reboot was produced for Cartoon Network first, then moved onto Toonami). In the same vein that The Venture Bros. is a throw back to '60s Super Science shows like Jonny Quest, this pays homage to both Hanna-Barbera mystery cartoons and '80s action hero shows like Mister T and Chuck Norris: Karate Kommandos.

The premise of the series is Mike Tyson (As Himself) leaves his home in Las Vegas and goes off to solve mysteries around the world, along with his friends, consisting of a ghost known as Marquess of Queensberry, Mike's adopted daughter Yung Hee, and Pigeon (voiced by Norm Macdonald), a man whose ex-wife transformed him into, yes, a pigeon. Each week, the team are given a mystery to go off and solve, and Hilarity Ensues, with Mike himself usually causing most of the problems.