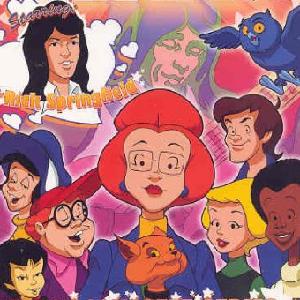 Mission: Magic! is a Fantasy Animated Series from Filmation that ran from 1973 to 1975 on ABC. Like the better known The Magic School Bus, it featured a magical teacher, Miss Tickle, who would take her "Adventurers' Club" group of six multi-ethnic students (consisting of the blonde Carol, the African American male Franklin, the Asian girl Kim, the fat, sardonic Harvey, the Cloudcuckoolander Socks, and the Malaproper Vinnie) through a portal in a magical blackboard, which she would open by bringing to life the statuette of her cat, Tut-tut, with the chant:

Very often Miss Tickle and her adventurers would be summoned to the other side of the blackboard by Rick Springfield and his owl Ptolemy for some special mission — often to spoil the schemes of some magical offender committing a series of themed crimes in "the real world," such as Dr. Astro, stealing treasures representing the Zodiac, or the light-wielding Madam Marquee and Baron Borealis, who steal power-stations.