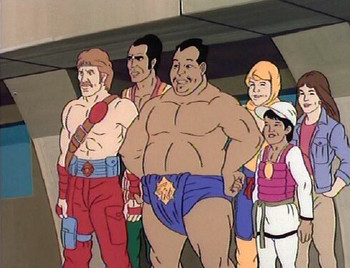 Chuck Norris: Karate Kommandos was an animated 5 episode mini-series that ran in 1986 and produced by Ruby-Spears. It starred Chuck Norris as Chuck Norris, a government agent who works with a team of operatives which consist of Pepper, a female Gadgeteer Genius; Reed Smith, Chuck's apprentice and Pepper's brother; a Tagalong Kid named Too Much; Kimo, a samurai; and Tabe, a sumo champion and The Big Guy. They fight the evil forces of VULTURE led by The Claw and Super Ninja.

The series was released on DVD in April 2011.

"Chuck Norris! He's got tropes of steel and strength to match..."