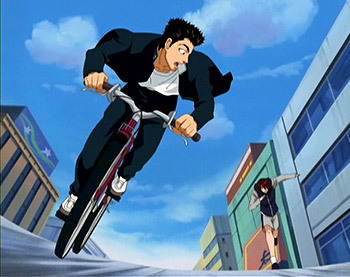 "STOP! THIEF!"
"I don't like stealing cars, but sometimes it's necessary. I have rules, though: I'll keep it clean, and if I take your car on a workday, I'll have it back by five."
— Burn Notice
Advertisement:

A character is in a hurry, most likely during a Chase Scene, when he or she sees a bike or some other mode of transportation propped on the side of the road. He or she promptly gets on it and keeps going full-speed. If the owner is present, the character will hastily say something like "I'm just borrowing it!" or "I need your bike! I'll bring it back later!"

Note that you usually never see the bike actually get returned, and if it is returned, don't expect the warranty to cover the damage.

A Sister Trope to Flashed-Badge Hijack and Convenient Escape Boat. In Real Life, you can get away with this without criminal charges on the plea of "necessity" if you can establish that the harm done by your stealing the vehicle was less than would have occurred if you hadn't.

Contrast Casual Car Giveaway, in which the hero gives a random soul their vehicle. Compare Confiscated Phone, where it's a phone being seized.

While still a Villain Protagonist at this point, Lewis hijacks Rooster's delivery truck and drives off into the night in search for Arthur.

While still a Villain Protagonist at this point, Lewis hijacks Rooster's delivery truck and drives off into the night in search for Arthur.