Hero with a Unique Name 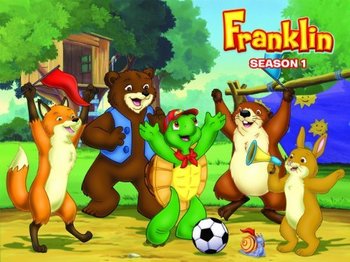 Here we see Fox the fox, Bear the bear, Franklin the turtle, Beaver the beaver, Rabbit the rabbit, and Snail the snail. Guess who is the main character.
[holding the phone] "Connie? The Steven Universe boy would like to speak with you. [to herself as she walks out of the room] I swear that's not his real name."
— Dr. Maheswaran, Steven Universe, "Marble Madness"

Let's say you want to make a cast that each have something in common or all part of a group or team. Warriors, sports players, animals, they all have something in common. But, how are people going to tell who is The Protagonist or main character if everyone shares the same qualities? Easy, just slap on a random and unique name on them that separates them from the rest of the cast.

For example, you make a story about main characters who are named after the planets of the Solar System (Mercury, Venus, Mars, etc.) and then you name the protagonist "Bob". Why? To help make him more important and stand out more as the main character of course! This also makes Bob much more memorable and easier to remember than the rest of the cast with their similar qualities and harder to remember names.

May overlap with Meaningful Name, "Awesome McCool" Name, Odd Name Out, and Aerith and Bob. Compare and contrast with Special Person, Normal Name. This trope is usdd for similar reaons as Flashy Protagonists, Bland Extras.

Expect their names to be hilariously Lampshaded by other characters especially depending on their outlandishness. Usually this character will be a Token Human or Token Non-Human for good measure.