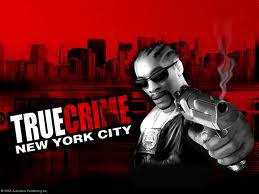 True Crime: New York City is the sequel to True Crime: Streets of LA. Like the first game, it was developed by Luxoflux and published by Activision.
Advertisement:

Marcus Reed is a member of his father's gang. Several years later, he appears to be betrayed by a friend and declared dead. However, he returns as a bloody mess to kill Kev Lar, the man responsible for setting him up. After killing him, Terry Higgins, a cop, saves his life from a gang member and agrees to arrest him. He doesn't like Marcus killing and threatens him to do as he says or he's on his own forever.

Five years later, Marcus is working for the NYPD, and works under Lt. Dixon. Victor Navarro, the chief, is not liking this. After passing his test, Marcus is driven to see his father, Isaiah, to show he's not a criminal anymore. Terry stops in a place for a deal, but seeming dies in an explosion. Since then, Marcus plans on tracking down the four crime leaders to avenge his death.