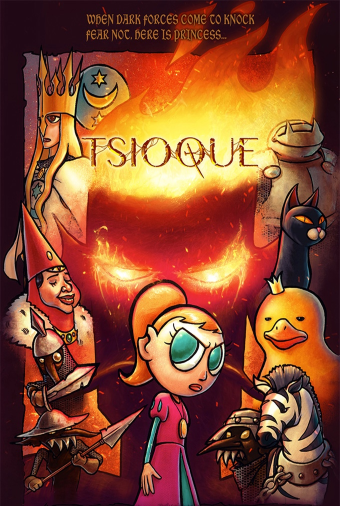 The story begins with the titular young princess, Tsioque, living with her mother the golden-haired Good Queen in their castle during a time of peace. But one day, news arrived that a dangerous beast called The Phoenix was on its way. To prevent it from reaching her home and daughter, the Good Queen led an army to fight the monster. The Queen's royal wizard, however, took her absence as an opportunity to take over the kingdom himself, casting dark magic to corrupt and transform the castle and summon demons to command.

And in the center of all this is little Tsioque, whom the Wizard throws in the dungeon, kept under lock and key. But the princess isn't one to wait to be rescued, and takes things into her own hands to escape the Wizard.

Tsioque is available on Steam

. A free demo is also available, which can be downloaded here

or through Steam here

What is all this racket?!