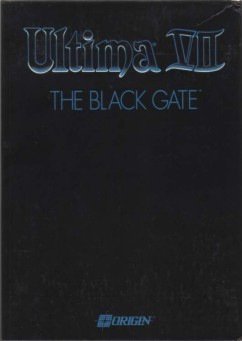 "Avatar! Know that Britannia has entered into a new age of enlightenment! Know that the time has finally come for the one true Lord of Britannia to take His place at the head of His people! Under My guidance, Britannia will flourish. And all the people shall rejoice and pay homage to their new... Guardian. Know that you, too, shall kneel before Me, Avatar. You, too, shall soon acknowledge My authority - for I shall be your Companion... your Provider... and your Master! MUUUHAHAHAHAAAAA!!!"
-The Guardian
Advertisement:

Ultima VII:The Black Gate is a PC game released in 1992 by Origin Systems. It is largely considered to be one of the best games in the Ultima series, possibly one of the best PC RPGs period, and had a nearly Dragon Quest-esque level of influence on Western RPGs which followed - nearly every open-world RPG released after 1992 owes at least a little something to U7 and the absurd freedom of action it provided to the player.

Ultima VII is the first game in the "Age of Armageddon" or the "Guardian Saga." Two-hundred Britannian years after the events of Ultima VI, the Avatar returns to Britannia through a mysterious red portal that s/he did not summon. The Avatar arrives in Trinsic, and finds Britannia in a state of peace - well, except for that string of brutal murders s/he just walked into! As the Avatar attempts to solve these mysteries, s/he gets to the root of Britannia's various problems - as well as their connection to the mysterious force calling itself "the Guardian."

Ultima VII later came with an expansion pack, Forge of Virtue. This added a new location, the Isle of Fire, to the map. Here, the Avatar could create the Black Sword as well as get rid of the core of Exodus, the Big Bad from the third game. A year later, a "sequel" was made in the form of Ultima VII Part II.

The original game was released for MS-DOS, and was never ported to any other contemporary operating system, particularly due to a unique memory management system that made it nigh unlaunchable even on Windows 95 machines. A fan-made engine called Exult

makes it playable on most modern systems (and adds several gameplay enhancements such as on-screen life bars.) A not-at-all-very-good adaptation was produced for the Super Nintendo, which suffered greatly due to Nintendo of America's censorship policies of the time. This version was ported to the PSP in 2006. An updated version compatible with modern PCs was released by EA in 2011. It is also now available for everyone along with part two over at Good Old Games.

"Yes, Avatar, that is the correct direction to travel"