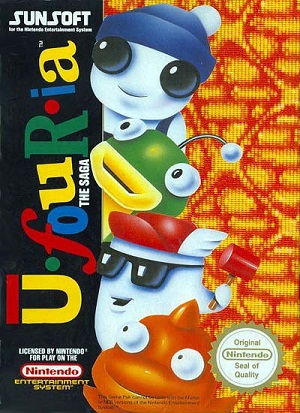 Ufouria - the Saga is a cult Metroidvania action-adventure game made by Sunsoft for the NES in 1991 under the title Hebereke. It was ported to Europe and Australia one year later (but not in the US), where it received slight modifications to graphics, text and plot, but keeping its distinctive Japanese-ness.
Advertisement:

Plot for the Western version: on a distant world, there live many strange creatures, including Bop-Louie and his friends Freeon-Leon, Shades and Gil. One day the friends fall down a crater, Bop-Louie climbs down there to save them, but faints and later finds himself in a weird world... Okay, it doesn't make much sense, but the original Japanese story isn't much better.

See the Hebereke page for tropes specific to the Japanese game, as well as the rest of the series.