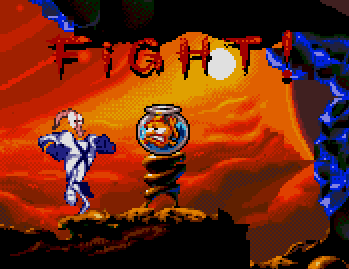 Earthworm Jim vs. Bob the Killer Goldfish. What an impossible challenge!
"There were sequences really near the beginning that kicked my ass until I was wearing my buttocks like a hat, while the closest thing to a final boss fight is basically you versus a wheelchair bound cross-eyed hobbit and you're armed with the BFG 9000."
— Ben "Yahtzee" Croshaw, on Halo 3
Advertisement:

A Zero-Effort Boss is a boss fight that's about as threatening as the crates you'd destroy for ammo. Against these foes, you'd have to fail on purpose if you wanted a Game Over. At its most extreme, you're incapable of losing the boss fight even if you actively tried to lose.

The most common version is The Man Behind the Curtain/Non-Action Big Bad variety. You have slaughtered the Big Bad's Mooks, infiltrated the Evil Tower of Ominousness, battled through the Elite Guard, and barely survived the fight against The Dragon. All that's left is the weak, unarmed, defenseless mastermind behind it all. A subversion of Authority Equals Asskicking, usually the Dragon-in-Chief was intended to be the real Final Boss, and this one-shot kill is meant to provide closure to the story. Or maybe it's just Played for Laughs that the Dark Lord Bludentiers is a fat slob who can barely lift a sword. Sometimes, there is an actual battle, but it's effectively won on the penultimate hit, requiring the player to finish off a vastly weakened enemy.

A less common variety is that for some reason, perhaps 11th-Hour Superpower, you are invincible for the final battle. This invincibility may not be obvious at first, since you still suffer damage and get attacked, and only reveal itself when you lose all health. Either way, it's impossible to lose. In some cases, the player Wins by Doing Absolutely Nothing, with not even a single button press required to defeat the boss.

As part of the Dénouement, a final boss of actually reasonable difficulty may have this as a sort of "last phase" after you've defeated the boss proper.

Compare Breather Boss and Anti-Climax Boss. Not to be confused with a Cutscene Boss, which is not only zero-effort, but zero-interactivity. Compare Clipped-Wing Angel, where a transformation is inferior or has an easily exploitable weakness.

Note that a fight doesn't count as a Zero-Effort Boss if you spent ten hours Level Grinding to kill the boss in one hit; that's not zero-effort, since you actively put in the time and energy to get strong enough to beat the boss that way. In order for the fight to count as zero-effort, it should come at a time when the player is at a reasonable level of power for the point in the game at which the boss is encountered, without any sort of level-grinding or exploitation of RPG Elements if the game includes them. It's only zero-effort if you've gone through the game without taking the time just to get stronger without doing anything else, and you still win the fight effortlessly.

Contrast Hopeless Boss Fight, which relates to boss battles you cannot win for the sake of the plot. Also compare with, as despite being portrayed as being opposites, they are often functionally identical in that with both tropes the game will progress at the end of the fight regardless of the player’s performance.