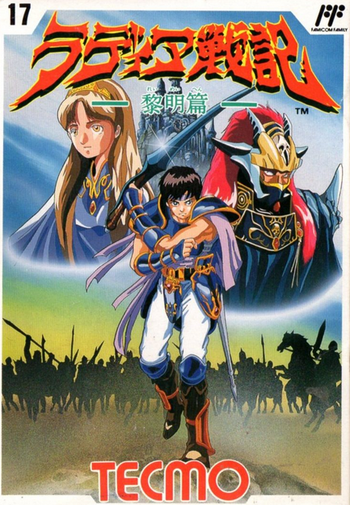 Radia Senki: Reimeihen ("Chronicle of the Radia War") is a Famicom Action RPG created by Tecmo in 1991. An English translation was planned under the name "Tower of Radia," but was ultimately never released, leading to No Export for You outside of Japan.
Advertisement:

The story revolves around a hero who awakens in a field, without any memories of who he is or where he comes from. After befriending a magician named Darus and rescuing Princess Lefis of Ark from her crashed airship, he learns that the nations of Samara and Ark have been conquered by tyrants named Nova and Gadiss respectively. The hero is launched into a quest to protect the Princess, free the people from the villains' reign, and discover his identity.

Remarkably for an 8-bit system, the game uses AI control for everyone but the hero, who is the only character controlled directly by the player. Allies can be given orders to attack specific enemies or stay back from battle. It also includes a surprisingly deep plot for its time, coupled with several cutscenes akin to another of Tecmo's NES / Famicom works.