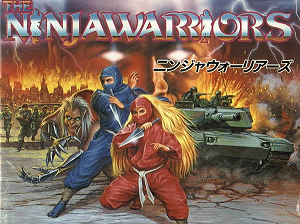 "No one could maintain the public order. The evil dictator, Banglar, controlled not only the police, but also the underground world; drugs, murder, sex. He held the key to everything since he became the President. Mulk, who was the leader of the revolutions, built two assassination tools to kill the President. They were called...

The Ninja Warriors is a side-scrolling action game by Taito, originally released for the arcades in 1987. It was sold as a conversion kit for Darius cabinets, making use of the same three-monitor setup which gave that game a 4:1 widescreen aspect ratio that was unusual at the time.

The game is set in a Dystopian future where Banglar, the President of the United States in 1993, issues martial law on the nation, with the military having total control over the law. A group of anarchist scientists decide that it is time to revolt against the government. Knowing full well that approaching the military themselves could be considered an all out suicide mission, the scientists create two androids that can sustain various forms of damage in order to do the mission for them. The robots, code named "Ninja" and "Kunoichi", are sent by the scientists in order to end Banglar's tyranny once and for all.

The game was ported to the PC Engine and Mega CD in Japan, while versions for all the popular computer platforms (such as the Amiga and Commodore 64) were released in Europe in 1989. A pseudo-sequel was released for the Super NES in 1994 titled The Ninja Warriors Again.

Not related to a hellishly difficult obstacle course.

"A revolution broke out. And everything came to an end. The troubled country seemed to be finished by the death of the wicked machines. But peace did not come. Because the ninja warriors, are the immortal murder machines..."